Use the links below to download the code used in the RoadStorm talks. 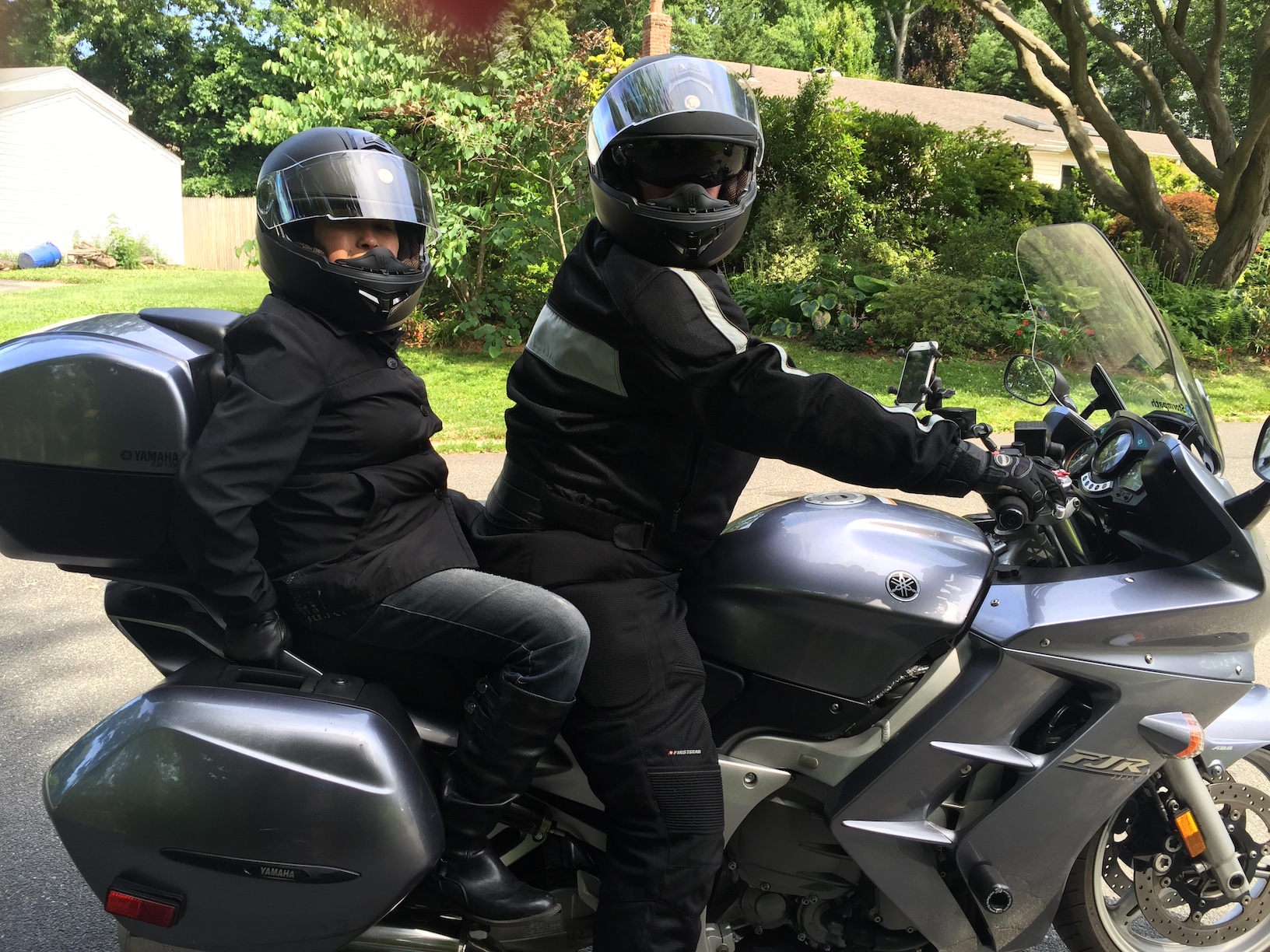 I'm Micah Silverman and I am Stormpath's Java Developer Evangelist.

Beginning on September 24th, I will be riding my Yamaha FJR1300A from New York, NY to Atlanta, Georgia and back. Along the way, I will be giving a talk on "Securing Microservices with JWT's (JSON Web Tokens) using the JJWT library". My presentation is based on the talk I gave at NY JavaSIG and a webinar on the same topic.

Watch for my daily dispatches from the road.

Here's the current schedule of talks:

Here's the route I'll be taking:

I'll be posting daily dispatches from the road here.

On the Road: Not surprisingly, it took me two hours to escape the gravitational field that is New York City. Once I got through to New Jersey, it was clear sailing. I did my first GoPro test today. It's mounted on my helmet. (You may want to turn your sound down at 45 seconds in - it's all wind noise from that point on)

Motorcycle Fun Fact: Did you know that if you want to negotiate a right curve on a motorcycle, you start by nudging the handlebars to the left? This is called countersteering. The initial push to the left causes the motorcycle to lean to the right.

Tech Quote of the Day: Debugging is twice as hard as writing the code in the first place. Therefore, if you write the code as cleverly as possible, you are, by definition, not smart enough to debug it. -Brian W. Kernighan

On the Road: Today was the "big push": an ambitious ride from Delaware to deep within North Carolina - nearly to South Carolina. I rode nearly 480 miles! Here's the route:

I took some GoPro footage while crossing the Delware Memorial Bridge (you may want to mute your audio as there's a lot of wind noise):

Motorcycle Fun Fact: Harry Hurt (yes, that's his real name) published the Hurt Report - called the "most most comprehensive motorcycle safety study of the 20th century." Amongst the findings, two results stood out: (1) that 2/3 of motorcycle/car crashes occur when the car violates the motorcycle's right-of-way. And (2) that helmets significantly reduce the occurrence of death and brain damage while NOT increasing the occurrence of neck injuries. (So, read up if you're in a state without a helmet law!)

Tech Quote of the Day: “When you see commented-out code, delete it!” -Robert ("Uncle Bob") Martin

On the Road: Todays ride was almost tougher than yesterday's, even though it was 200 miles shorter. It rained in the morning, so I got soaked. But, thanks the the prevalence of Starbucks, I quickly got off the road and chilled out for a few hours. Then, there was a massive accident on I-85 between South Carolina and Georgia. Fortunately I was no where near it. Google Maps routed me around, which truthfully, was the best part of the ride.

I finally made it to Atlanta and Microsoft Ignite.

You may be asking yourself, "Why is Java Roadstorm at Microsoft Ignite?" I am helping out with the Stormpath booth, including any Java questions that may come our way. Tomorrow, is my first talk on the tour hosted by WeWork & AJUG in Atlanta and sponsored by Stormpath. RSVP here.

Motorcycle Fun Fact: Swerving is dangerous in any vehicle, but especially so on a motorcycle. The rule-of-thumb regarding animals is that if it's small enough to eat in a single sitting, you can (relatively) safely run it over with your motorcycle. Not the I am advocating the killing of animals by motorcycle, but if it's a squirrel that darts out into the road, it's a lot safer for you and those around you to NOT swerve to avoid it.

Tech Quote of the Day: There are only two hard things in Computer Science: cache invalidation, naming things, and off-by-one errors. -Phil Karlton (Leon Bambrick added the "off by one" part)

NOTE: I am at the MS Ignite conference for the next two days and then a two day visit with my Uncle and Aunt in South Carolina. Next dispatch will be on 10/3 after my talk at The Iron Yard Charleston.

On the Road: Today's only riding was to get from the Microsoft Ignite conference to WeWork over in Buckhead and then back to the hotel. Well, that turned out to be more of a challenge than I thought thanks to a 45 minute Georgia thunderstorm. I found a lovely overpass to hangout under until the weather cleared up and then continued on my way.

Thanks to WeWork for hosting at their offices and to AJUG for getting the word out! And, big thanks to Stormpath for sponsoring this whole tour.

Motorcycle Fun Fact: You may have heard of or seen a motorcycle accident involving a telephone pole or a street sign. You may have wondered, "How did a rider hit such a relatively small target?" The answer is that, when less experienced riders get into a jam, they tend to fixate on the object they are heading toward and then hit it. More experienced riders know that to avoid an object, you must look away from where the bike is going and instead look to where you want the bike to be.

Tech Quote of the Day: The amateur software engineer is always in search of magic, some sensational method or tool whose application promises to render software development trivial. It is the mark of the professional software engineer to know that no such panacea exist. -Grady Booch

On the Road: The Microsoft Ignite conference was a great experience and we had many conversations with attendees about their auth needs. On 10/1 I set out for my next stop in South Carolina. I had a great ride from Atlanta, GA to Charleston, SC where my Aunt and Uncle live. I visited with them for a couple of days. Tomorrow I will speak at The Iron Yard - Charleston.

On the Road: It was an easy half-hour ride from my Aunt and Uncle's place on Daniel Island, SC to downtown Charleston.

I got to cross over the beautiful Arthur Ravenel Jr. Bridge on the way to downtown Charleston.

Here's a few of the awesome people that came out to The Iron Yard - Charleston to learn about JWTs with Java:

Motorcycle Fun Fact: Do you know what to do if your rear wheel locks during a hard brake? You might be inclined to release the brake before you lose control. That action would cause a "highside". When the rear wheel starts to rotate again, a large amount of torque is generated, causing you to go flying off to the side or over the handlebars. The correct maneuver is to ride the skid out, slowing down as quickly as possible, without losing control of the bike. In fact, many training courses will advise you to press down harder on the rear brake, so as to not be tempted to let the rear wheel start spinning again.

Tech Quote of the Day: UNIX was not designed to stop its users from doing stupid things, as that would also stop them from doing clever things. -Doug Gwyn

On the Road: 3 hours of ride from Charleston, SC to Charlotte, NC. It was a gorgeous, cool day with smooth sailing the whole way.

It was great to meet the folks at The Iron Yard - Charlotte.

Tomorrow, is a 300 mile ride to Richmond, VA, where I will be speaking at RJUG

Motorcycle Fun Fact: "Lane Splitting" is when a motorcyclist rides in between cars when there's heavy traffic. In most of the US, lane splitting is illegal. In California and in many places throughout the world, it is legal. A 2015 study found that lane splitting reduced the likelihood that a motorcyclist would be hit from behind, and that they're less likely to suffer head or torso injuries. Surprised? I was too!

On the Road: Tough ride today. Overcast and high winds made the 300 mile journey from Charlotte, NC to Richmond, VA challenging. It was well worth, it though! Great bunch of people at Ippon USA and RJUG. I even got to ride my bike right into their offices! 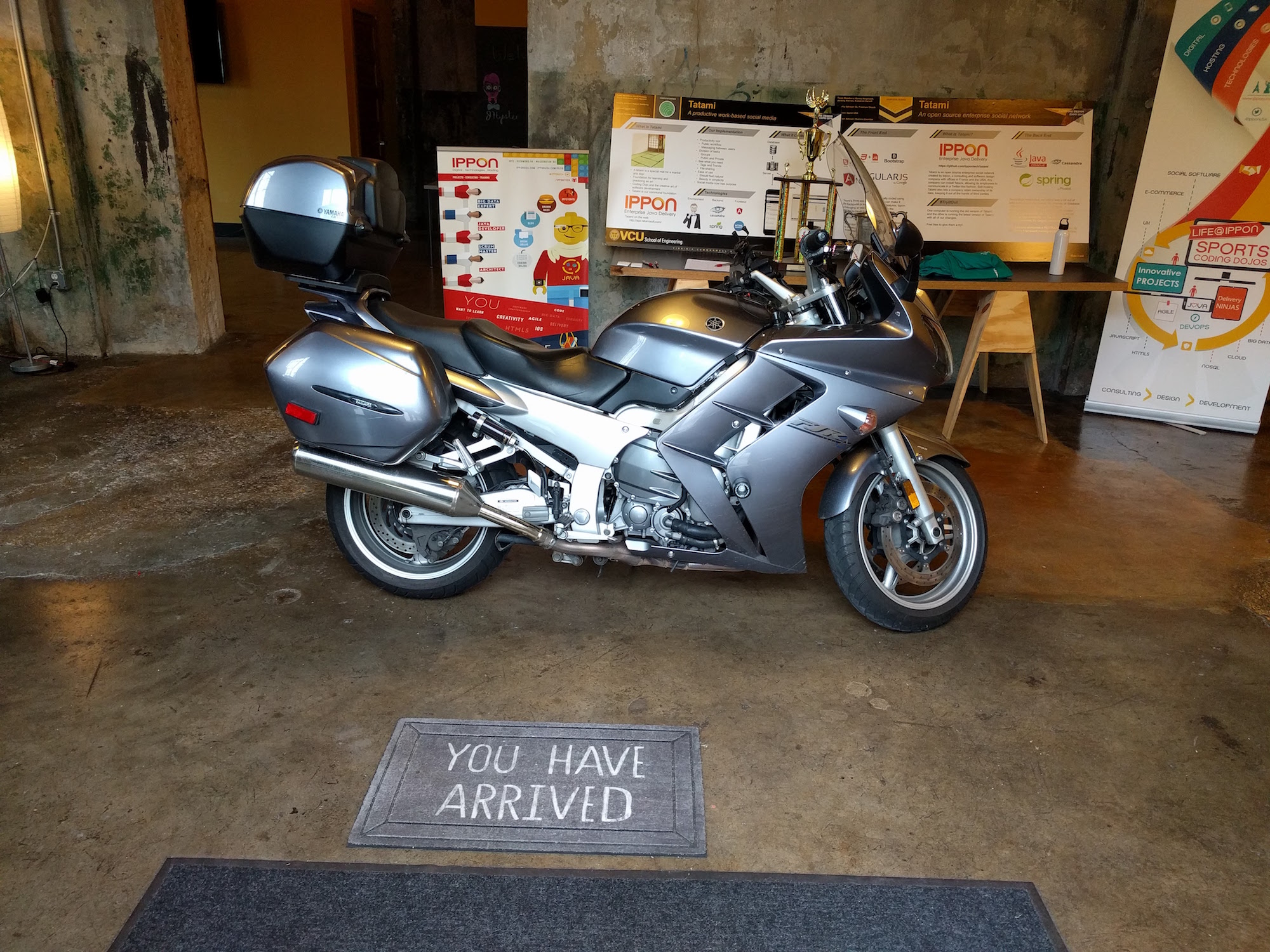 Motorcycle Fun Fact: Did you know that when you lean on a motorcycle, you have the same or often more rubber contacting the road than when it's upright? If you knew that, did you also know that the amount of rubber on the road doesn't matter in terms of the amount of grip on the road you'll have? The second law of friction is: "The friction is independent of the contact area." What? Weird! There's a great treatment on the subject here.

Tech Quote of the Day: Random numbers should not be generated with a method chosen at random -Donald Knuth

On the Road: Glorious sunny & breezy ride from Richmond, VA to Arlington, VA. There is nothing quite like riding around the monuments in DC on a motorcycle. It's scenic, historic, and the tree-lined drives, windy roads and bridges make it beautiful all at the same time.

Thanks to Sapient Government Services & DCJUG for hosting. There was a little bit of a logistics snafu and both Sapient and Stormpath ordered pizza. That was a lot of pizza, man!

Motorcycle Fun Fact: Steve McQueen’s infamous 65 foot motorcycle jump in the film "The Great Escape" was actually done by American Triumph dealer Bud Ekins who did it in just one take.

Tech Quote of the Day: Do what you think is interesting, do something that you think is fun and worthwhile, because otherwise you won't do it well anyway. -Brian Kernighan