It has been a long long while since I’ve posted anything here. Life just kind of got in the way. Lame. Frankly, I’ve gotten a bit away from the “fit” part of afitnerd.com. Here’s what I am excited about: I recently took a position as the Java Developer Evangelist for Stormpath. This is such a wonderful mix of two of my favorite things - programming and writing - I sometimes can’t believe my good fortune! Shameless plug alert: I really love Stormpath and what we are up to. Check us out. And, I’ve begun putting the “fit” back in. I’m beginning to run again, starting with 3 to 5 sessions per week on the elliptical.

I am very easily distracted. I wanted to set myself up for success in my new position. When I use the pomodoro technique, I’m in a much better place.

Recently, I started using a combination of Google Chrome “people” (personas) and killing apps to try to keep distractions away while working in a pomodoro. I created a persona called “Distractions”. Here’s what the process of getting rid of distractions looks like for me:

During the pomodoro break, I reverse the process.

On top of that, I like to have certain apps on certain spaces on my two-display setup. This meant CMD+Tab to the app or jump to the space, and then start it up (or kill it, depending on where I am at). With only 5 minutes in a pomodoro break, all this switching around and launching can add up.

This post is all about how I automated this process using an application that’s been in OS X for a very long time: Automator. Atomator’s been built-in since the Tiger release in 2005! And, I’ve completely neglected it even though I’ve been a full-time OS X user since 2008. Full disclosure here: I am an Automator and Applescript n00b. The Applescript examples that I am going to share with you work on my setup running Yosemite. YMMV!

There were a couple of challenges to get this working the way I wanted. First, I had to be able to launch certain apps on certain spaces. I also needed a way to open and close certain Google Chrome personas without exiting Chrome altogether.

Let’s take a look at the close distractions script first:

Lines 3 - 25 are pretty self explanatory. For each named application, tell that application to quit. There were a couple of applications that Automator didn’t know about even though they were running. I probably just didn’t have the name exactly right. Automator gave me a picker to select the app and once I did that, the proper app would quit when I ran the script. Some secret sauce going on behind the scenes there.

Lines 27 - 35 are where things get interesting. In this case, I am activating the Google Chrome application and then interacting with the menu to accomplish the goal of closing the “Distractions” persona.

After testing this script in the Applescript editor, I was ready to create an Automator script and bind a key sequence to it. In the Automator app, I chose to create a new workflow of the “Service” type. I then dragged over the “Run Applescript” item from the library on the left. In addition to pasting in the above script, I selected some key settings that make the keyboard shortcut work the way I want it to. 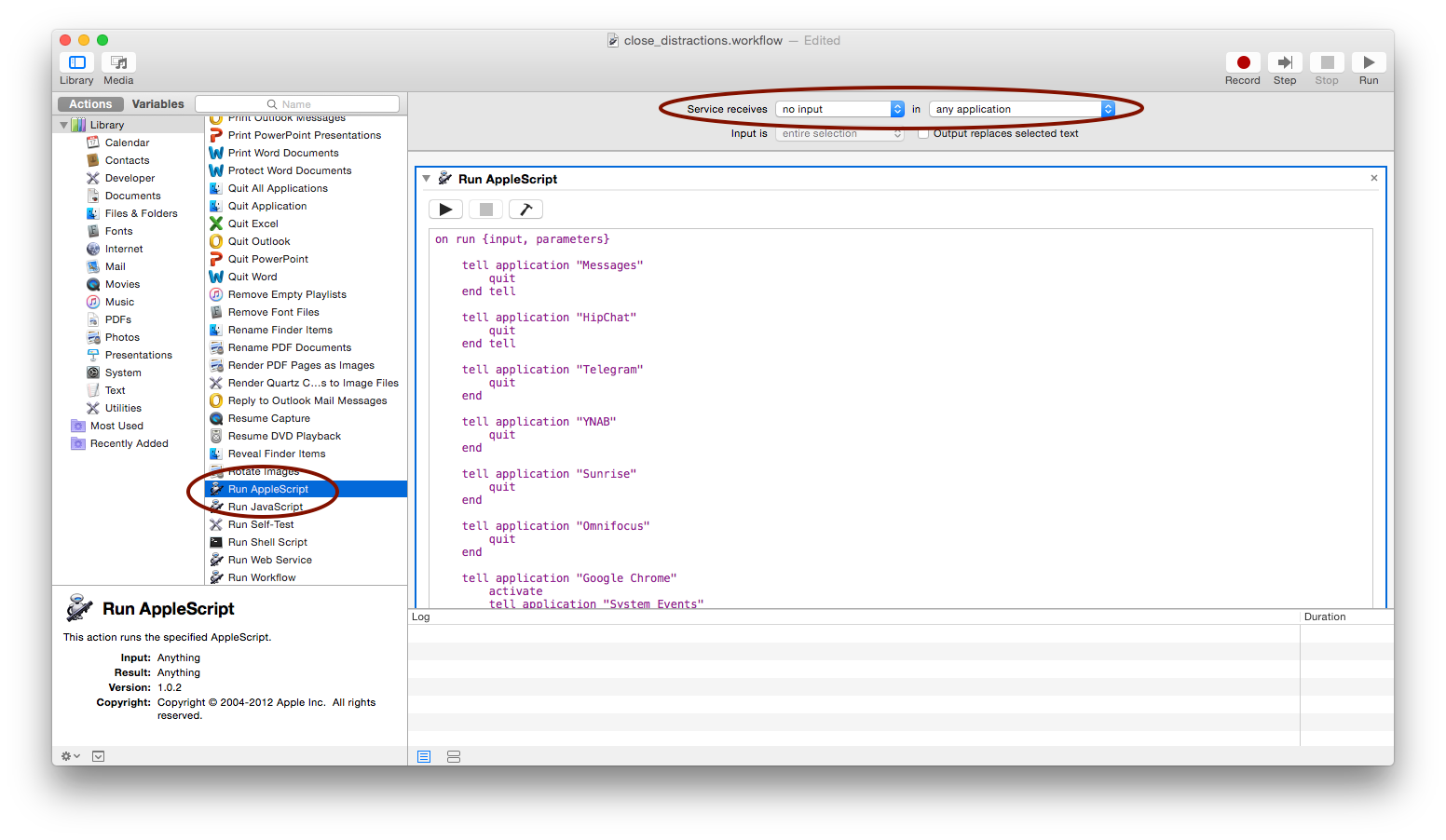 Toward the top of the pane, there are two dropdowns. This service automation does not receive any input AND I want it to be available in “any application”.

I always wondered what the universal menu item “Services” that I see on all mac apps was for. Now I know - a little at least. Once I saved the automation, the workflow I had created showed up in the services menu of (nearly) any app I run. 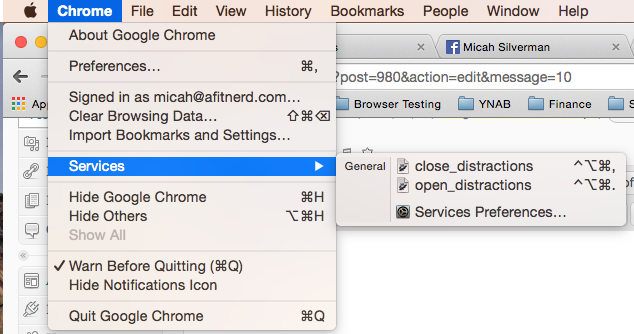 Having these workflows available in any application is critical to being able to being able to trigger them by a key sequence. In the Keyboard System Preference pane, there’s a Shortcuts tab. On that tab, you can bind key sequences to variety of types, including Services. 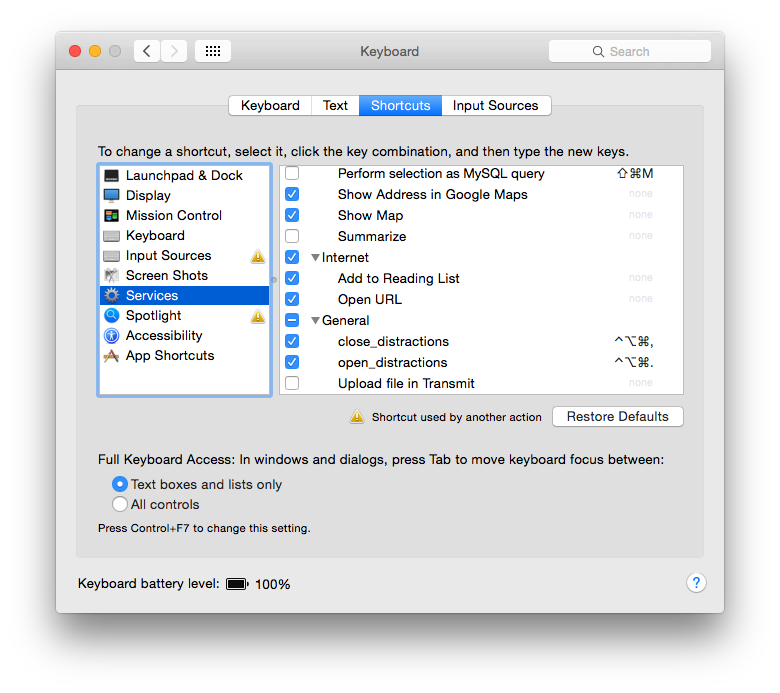 I bound the “close_distractions” workflow to the key sequence:

I bound the “open_distractions” workflow to the key sequence:

Let’s take a look at the “open distractions” workflow code. Again, some of this is very specific to my setup. YMMV.

Before I break down this script, let me tell you a little bit about my setup. I have dual 27” HDMI displays. The first display has 3 spaces and the second display has 2 spaces. On Desktop 1, I keep all my “productivity” apps. (The quotes are because I am very easily distracted by these apps if they are always running). These include apps like YNAB, Sunrise Calendar, and Omnifocus. Desktop 2 is my workspace. I usually have iTerm2 and IntelliJ running on this desktop. Desktop 3 is a scratch space for apps I fire up and tear down quickly. Desktop 4 is for my browsers. And Desktop 5 is for my messaging apps, like Messages, Telegram and Hipchat. 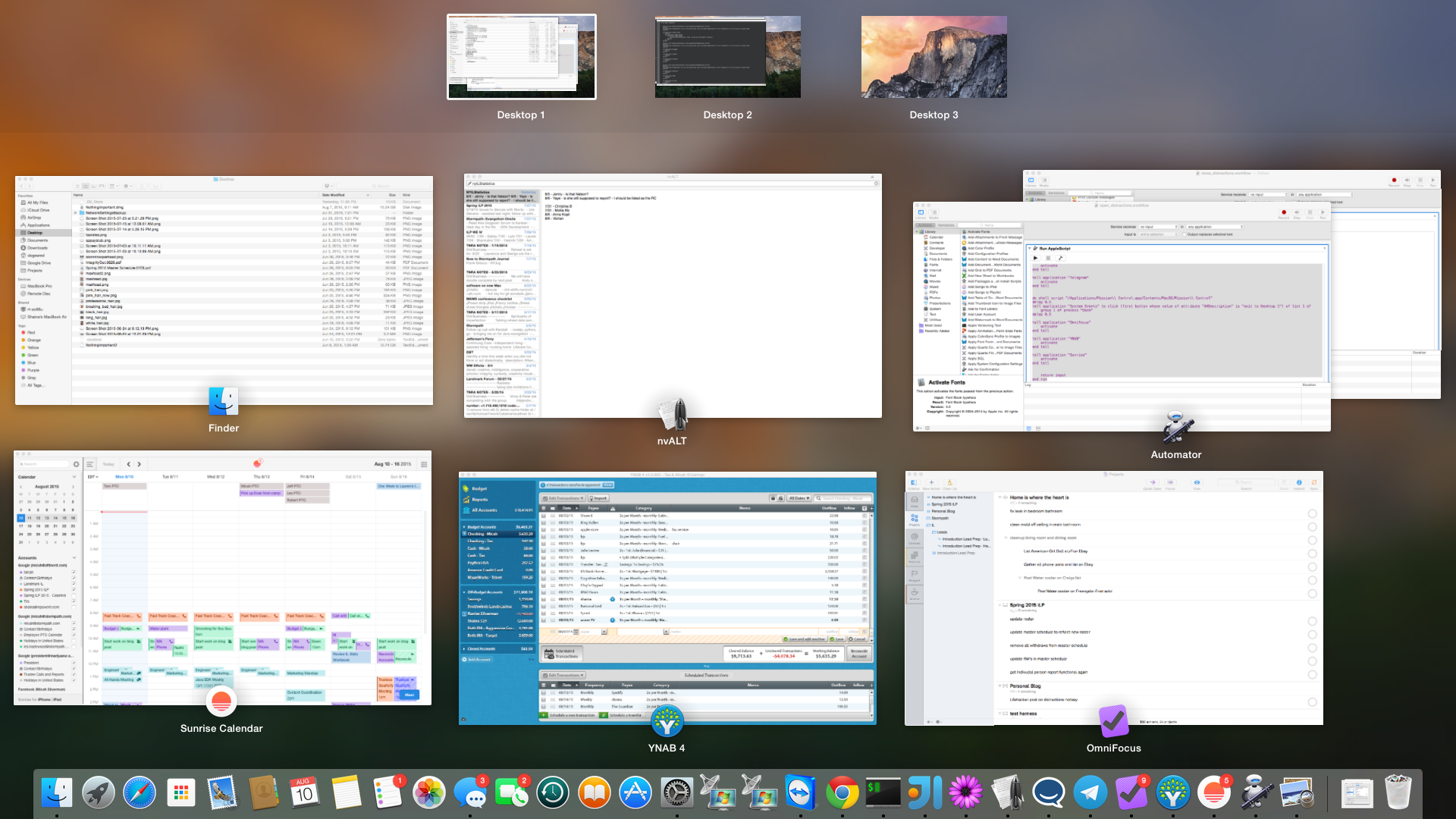 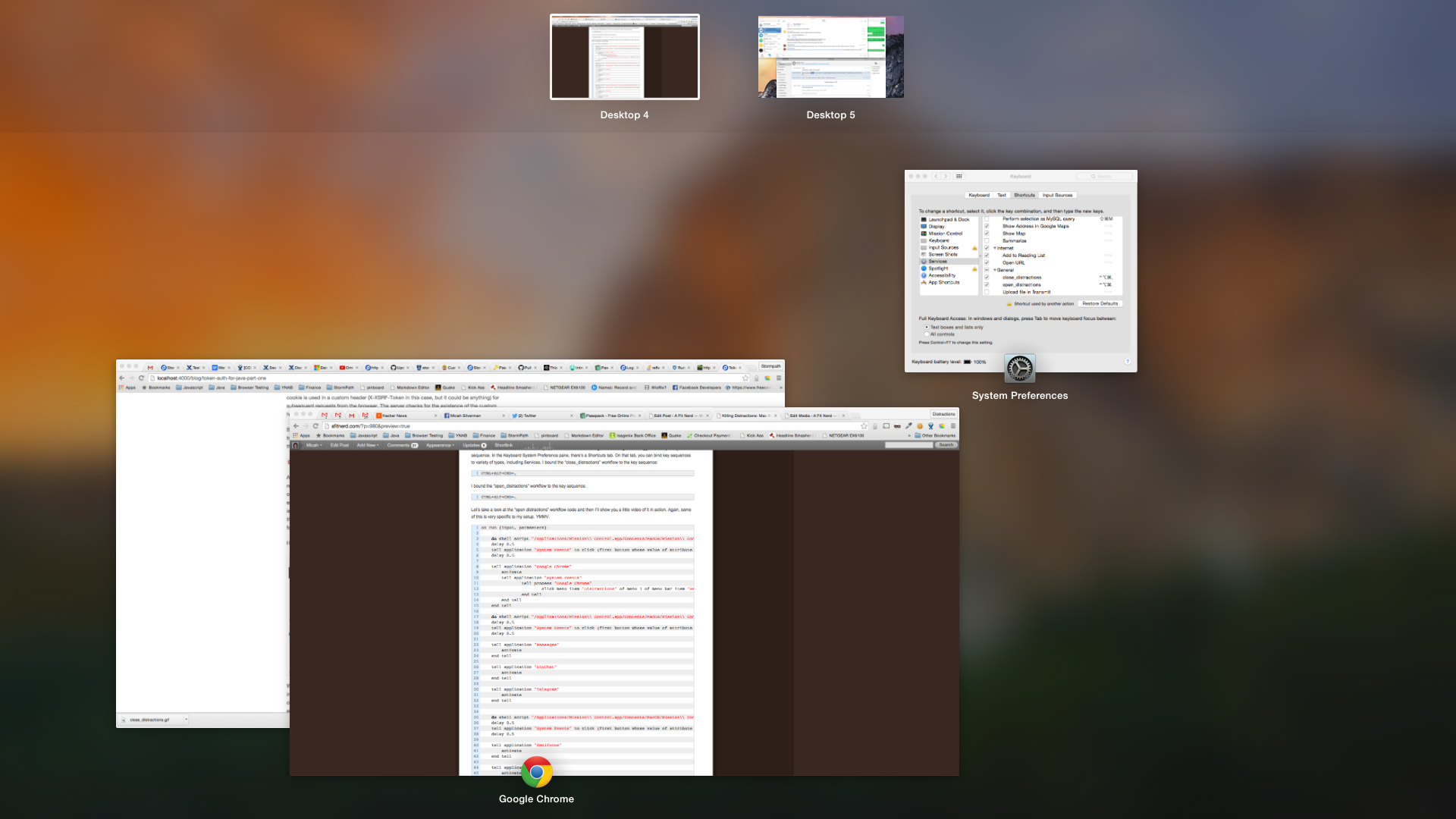 Part of what I wanted to accomplish in this automation was having the apps launched on the correct space. Lines 3 - 6 in the code block above accomplish this. Line 3 gets us into Mission Control. Line 5 clicks on the appropriate Desktop. In this case, Desktop 4.

Once I am on Desktop 4, I can launch my Distractions Google Chrome persona, which is what lines 8 - 15 does.

Next, I switch to Desktop 5 and launch my messaging apps.

And, finally, I switch to Desktop 1 and launch my productivity apps.

I also bound the key sequence:

to toggle Do Not Disturb mode.

Now, just before I start a pomodoro, I hit:

And, when I am in the pomodoro break, I hit:

During my testing of these scripts, I had to add certain applications to a list of applications allowed to interact with the Accessibility features of OS X. I probably should have kept better track, but it included Automator and Google Chrome. 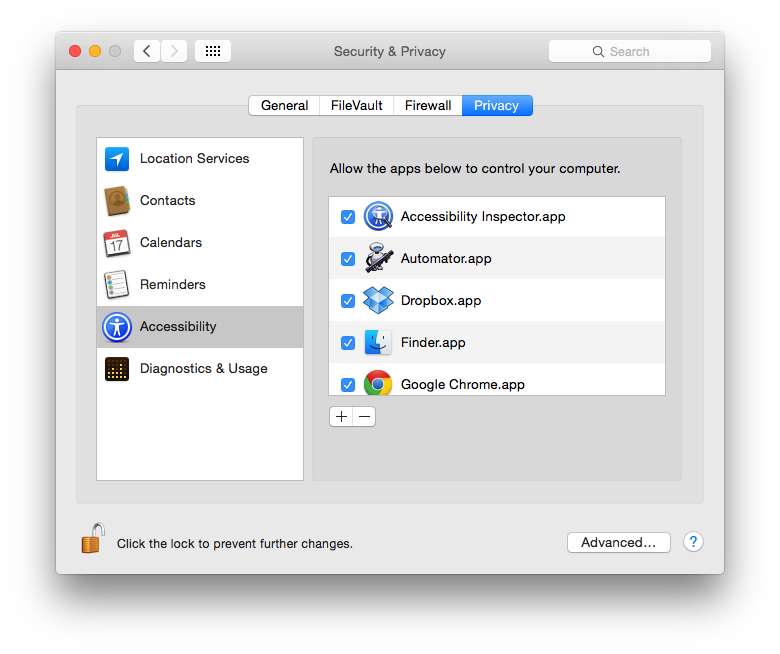 I started looking into toggling Do Not Disturb mode as part of the key sequence for open and close distractions, but I bailed on that. I also started to look into hooking into SizeUp so that I could lay out the messaging windows the way I like as part of the open distractions script, but I bailed on that too. Getting to the point I am at - which is very functional - took about an hour of Googling and experimentation.

Any feedback on how to make it more awesome or to correct any bone-headed things I am doing is much appreciated.