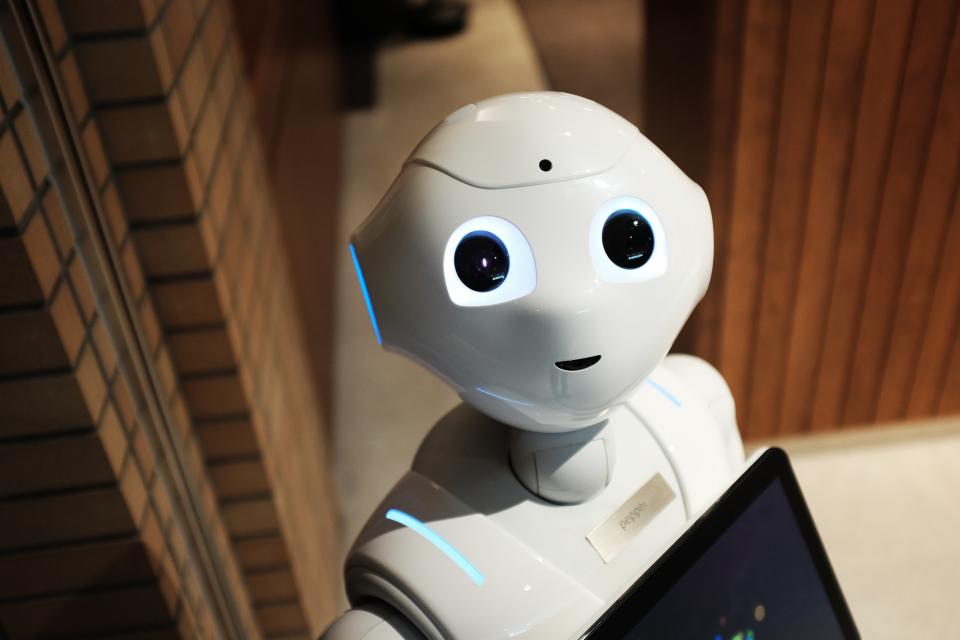 A frequent lament of my daughter is, “No more robots, Dad!” I was a very early adopter of home automation, which included things like ReplayTV and X10 in the late ’90s and early aughts.

I had the very first Roku and we cut cable and switched to Internet-only service around 2008. It was almost as expensive to have just Internet back then as it was to have Internet, TV and phone service bundled together. I’d always thought that the TV would tie into home automation and some early attempts included showing caller id on-screen via cable boxes.

Fast forward a few years and around 2014, I bought two devices: a first generation Amazon FireTV Stick and a first generation Amazon Echo Dot. I was travleing a lot and the limitations of the Roku made me want to look at a new platform. I wanted to be able to install a VPN client so that I could access my home media server when on the road. The Roku was completely closed and proprietary while the FireTV platform was a custom build of Android. This enabled me to side load the OpenVPN client. I was intrigued by the Echo platform, but I was more interested in home automation than in listening to music. So, the Echo Dot was perfect. At this time, the Philips Hue platform was already released, so I bought my first modern home automation kit: two Philips Hue dimmable bulbs and a Philips Hue bridge. Combined with the Echo Dot, I could now say: “Alexa, turn on my light 50%”. This was a revelation to me. My wife and daughter were much less impressed with this than I was.

What Amazon, Google and Apple (to a lesser degree) did with home automation is nothing short of brilliant. They made it so that you could use a variety of smart-speaker enabled plugs, switches, bulbs and other types of devices. No vendor lock-in. However, it became much more likely that you’d settle on one brand as the “nerve center” of all this automation. I ended up with Amazon. I’ve been told by friends (and have not verified for myself) that Google’s Home line of smart speakers is more sophisticated than Amazon’s Echo line. Even if that’s true, it’s unlikely that I would switch any time soon (I have an unopened Google Home mini in my storage closet. I’ll send it to the first person to @afitnerd me on Twitter and venmo me the cost of shipping).

So, I am pretty locked in to Amazon. But, I am free to range around all the devices that support the Amazon platform. And, most of the devices I buy these days support Amazon and Google, at least.

I got my first Philips Hue kit nearly at the time it dropped. We used those bulbs for years. Every now and then I’d have to reset the hub, but it was infrequent enough that it didn’t bother me. I never bought additional Hue bulbs because they were expensive compared to other other brands coming onto the smart bulb scene. That didn’t matter since the GE bulbs I got later on integrated with Amazon Alexa just as easily as the Philips Hue bulbs had.

On April 30th, 2020, Philips not only discontinued support for the v1 hub, they made it lose all Internet connectivity, making it inoperable with any smart devices. You could still control the bulbs with the mobile app, as long as the hub and the app were on the same network. The v1 hub was introduced in 2012 and eight years is a long time in Internet years. There were a number of security concerns with the v1 hub, which is why Philips said they were dropping ongoing support for it. The v2 hub was released in 2015, had a faster processor and would have continued support from Philips (or, so they said).

But, fool me once… - I didn’t like that Philips might brick future devices I would buy from them. True to their promise, on May 1st, I could no longer control my bulbs from my Amazon devices. I reached out to Philips, hoping to get a discount on a v2 bridge. It’s currently priced at $58 on Amazon. To their credit, the Philips Twitter account was very responsive: 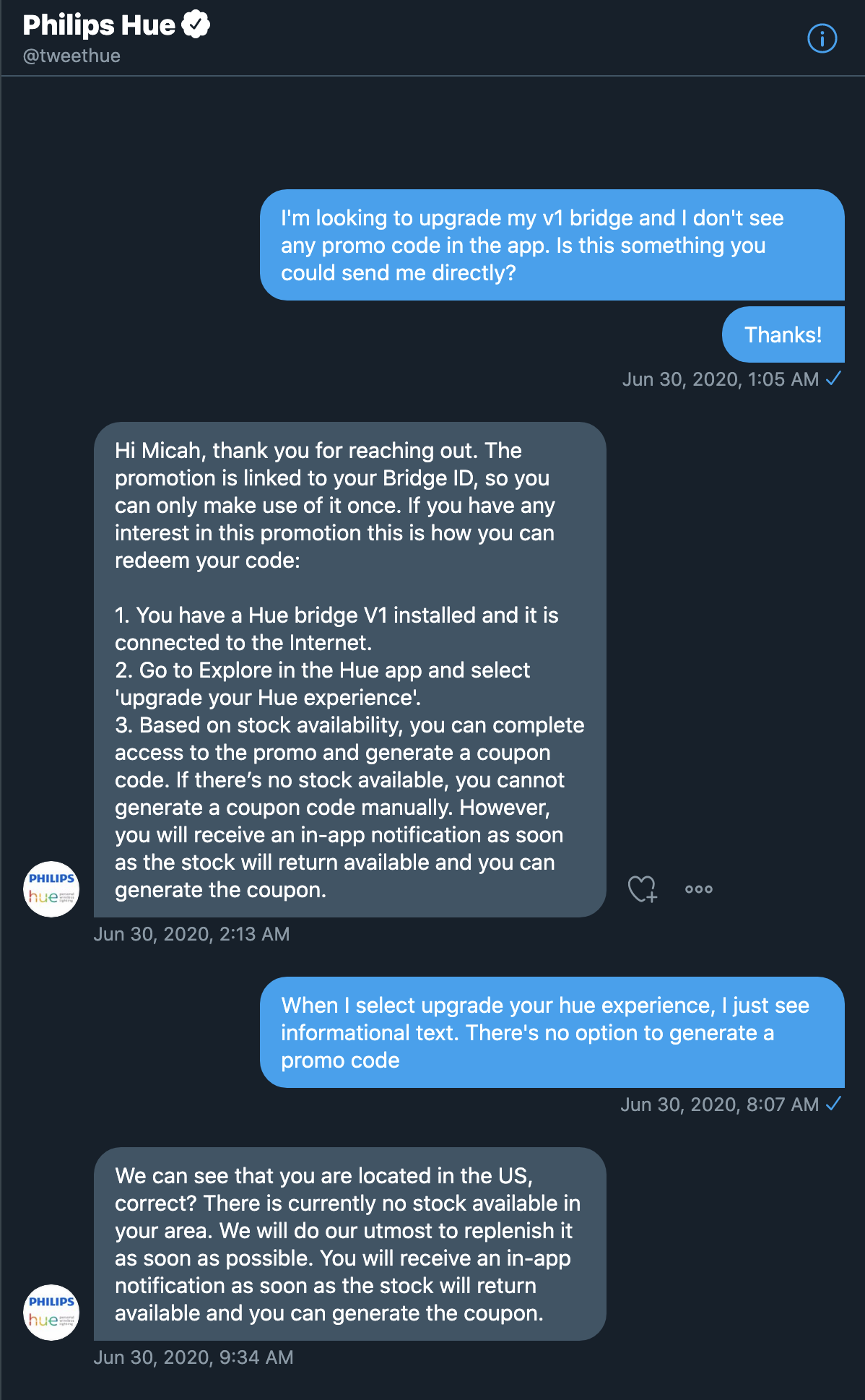 The bottom line, though, was that there were no promos I could use to offset the cost of the v2 bridge in order to keep using my Hue bulbs. Well, I couldn’t fault them too much. In 6 years, I’d only ever bought the hub and the two bulbs. I might have been more upset or might have bitten-the-bullet and bought the v2 hub, but for the fact that there were so many other options!

I hunted around and bought a C by GE starter kit. It was on sale at the time for $36. I was impressed that GE built their hub into the smart plug that could connect to my network wirelessly and could control up to 50 bulbs. So, for 28% less than the cost of a Hue v2 bridge, I got four dimmable bulbs and a smartplug. I’ve since bought another 4 bulbs and easily connected it to my existing smart-plug-bridge.

This is a perfect example of avoiding vendor lock-in thanks to the architecture that Amazon and Google provided for their smart devices.

Upward and Onward with Home Automation

Currently, I have a boat load of switches, plugs and devices in my house that I control via the 6 various Amazon devices I have as well. Here’s a list (note: these are affiliate links and I get some cents if you follow them and make a purchase):

I hope you dug my little tour of home automation. I’d love to hear your experiences. At me at @afitnerd on twitter or comment on this post.